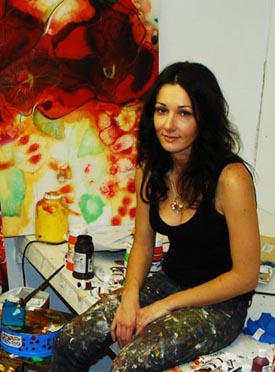 Born in a coastal town of North Wales, Kerry's passion for art was inspired by a love of beautiful old picture books (Rackham, Dulac and Beardsley were favourites and later on, Pre-Raphaelite painting and Art Nouveau). This developed into a degree in illustration in 1996, originally intended to lead to a career in book illustration.
Following University she worked in S.America before returning to the U.K. to work as a designer and illustrator for an exclusive company, specializing in sculptured clay murals for private residences in the Middle East, United Arab Emirates and the U.S.A.
Kerry now works independently from her studio at home in North Wales, using all of these influences and her flexibility to create pieces of art in a variety of subjects.

T E C H N I Q U E
Kerry worked for years in pen and ink perfecting her drawing skills before diversifying into watercolours and later, a variety of mediums, acrylic and oil. Following her experience with the clay murals, she became interested in painting upon heavy textures and experimented widely to produce original effects.
Her acrylic paintings are uniquely formed upon board or canvas first, using
textures and gesso. The colour is then built with several transparent layers to create depth. Her abstract pieces were initially based upon satellite photographs of Earth which created the 'Volcanic' Collection in 2005/2006. This has since diversified to include contemporary landscapes and figure-work, all carrying her unique style.